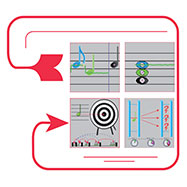 Active Ear Training
Software that Listens to You

This site contains links to youtube-videos about music theory released by AlgorithmsAndDatastructures.com.

The first four videos are from www.listening-singing-teacher.com

The first video introduces you to the basic elements of music theory:

The next video introduces you to the tempo. You can either define the tempo by beats per minute or tempo markings. The tempo markings are Italian terms which describe not only the approximate tempo, but often also the mood in which a piece of music should be played. The most common tempo markings are: Largo, Adagio, Andante, Moderato, Allegro, Vivace and Presto.

The next video explains the meaning of note symbols and their rhythmic value (note length). Rhythmic elements are introduced to help imagine a rhythmic pattern, The standard rhythm counting system is presented.

Not directly related to theory, the next video shows the importance of singing or humming for all musicians and how ear training can help to sharpen the mind for listening.

The next videos are from www.listening-music-teacher.com

In the next video, we will show you the relationship between our music system and nature. A string will swing in its natural frequency when plucked. However additional vibrations occur at 1/2 of the length, and at 1/3, 1/4, 1/5, 1/6 and so on. This additional vibrations are called overtones, or harmonics. The higher the number in the denominator, the more complex the form will be. And thus the less the intensity of the swinging will be. This relationship builds the foundation of the development of music: From stone age until today. Probably, the first demonstration of this theory was done by Pythagoras around 550 BC. However, since this relationship lies in the laws of physics, it must have been used by nature even before man came into existence. The video explains why a major scale has whole and half-steps. The video guides you from just intonation scale to the equal tempered scale. It also shows you important elements of ear training: How to hear differences: the Precision Listening Method.

This video is uploaded as 3 separate parts:

After knowing the basic context of scales and intervals, the next video introduces you to tertian chords.

Triads consist of three notes and have two intervals. Common chords use thirds as intervals. The quality (minor, Major, diminished or augmented) of the triad is determined by the stacking order of the thirds. All qualities come in three positions: Root position, first inversion or second inversion.

Adding another third to a triad, leads to a seventh chord. Seventh chords consist of four notes and have three intervals. They allow for three inversion before they come back to the root position. A somehow special case is the harmonic seventh chord.

The next video introduces you to the Singing Funnel Method and to the Octave Anchor Pitches Method.

The next video introduces you to Relative Pitch and intervals.

The next video introduces you to the Interval Overtone Method.

The video "Absolute and Relative Pitch Inside our Methods" explains our reasons for our approach to acquiring absolute and relative pitch..

Video: Absolute and Relative Pitch - Inside our Methods

This section introduces you to the absolute pitch point. Where does absolute pitch and relative pitch meet? The Pitch Keeper Method lets you train time stretching and thus points out where you start loosing a pitch. It is loosing interest in the sound. Through concentration you can keep the pitch for a longer time period. However concentrating is a big effort. Therefore you have to look for ways to store the pitch in your mind for later retrieval. One way is to use muscle memory. The only way we can express pitch is through singing or humming. Therefore storing the cords muscle positions and associating them to a memorable event (or term e. g. note name) is the key to: How we transfer short-term memory (=muscle memory) to long-term memory.

The PitchBlitz introduces a method to measure your relative pitch ablities.